At both Impossible Aerospace and Open Lunar Foundation, one of the first devops projects I worked on was utilizing the source control infrastructure available from the respective provider (Atlassian and GitHub, respectively). A mantra I follow is "test early, test often" and the first step in testing is building. Having a pipeline setup that can even just build your code for every commit is a hugely valuable resource. It forces you to get a handle on the development environment necessary to build your code, a good step towards avoiding "it builds on my machine" problems.

I realized very quickly that having the ability to push to my master branch on GitHub and have the updates automatically deployed to my webserver would be fantastic. This also provided me an opportunity to start working with GitHub's workflow infrastructure, something I expect to be using more as I work on other projects. Most of my experience in devops has been with BitBucket's Pipeline feature.

I started by reading lots of GitHub Actions documentation and focused on just getting my Python environment working -- Python, pip, pipenv. The first workflow file that actually functioned and spit out something useful is below.

However, this had an issue, which is evident in the shell output: pythonLocation: /opt/hostedtoolcache/Python/3.8.2/x64. I determined I was using the wrong argument for actions/setup-python, I should have used python-version: 3.6. I believe I carried that over from a different action example before I was using actions/setup-python.

Next I simply changed the line pipenv run pelican --version to pipenv run pelican content -o site -s publishconf.py to start building my site. This is the same command I run locally to build the production version of my site, only locally I use make publish. I opted against using the Makefile for now, even though that means my workflow isn't identical to my local process. Why? Because make isn't in the default image and I didn't feel like adding it as a dependency.

Getting the site building was the easy part, especially with pipenv. Deploying the site was the trickier bit, mostly because I'm still very much a beginner at GitHub Actions. I started by adding secrets to my repo for the SSH details (user, host, path). BitBucket, and basically all cloud source control providers, has the same concept of repository secrets which allow the user / team to store sensitive items, like SSH keys, access tokens, etc. in a repository for use in CI / CD / whatever use.

With the secrets installed, I then flailed against SSH and rsync for a bit. I started with webfactory/ssh-agent and directly calling rsync in a step. However, I never got a valid SSH connection, I kept getting Host key verification failed, indicating that something with SSH configuration clearly wasn't functioning. It's very likely I was doing something wrong; however, I didn't have the patience or interest in figuring out what it was -- somethings you have to know when to say "this isn't worth my time" and focus on the overall goal of your project.

So, I switched to easingthemes/ssh-deploy which worked immediately. Below is the new deploy step following the build step:

And here's a successful run of the workflow showing all of the steps. 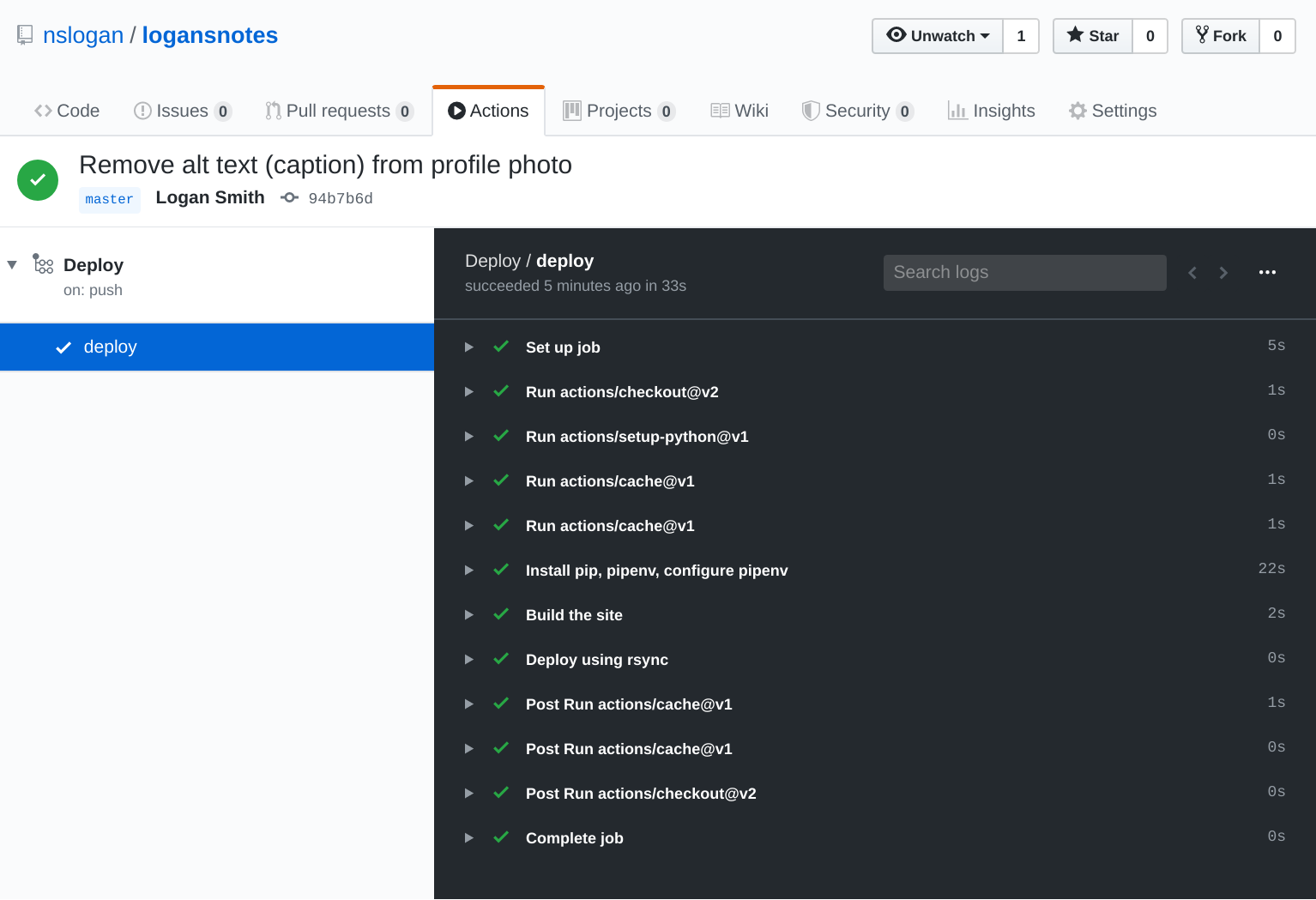 At this point, my site was being deployed on any push to my repository, so I decided to make two more improvements before calling it good and restricting the workflow to the master branch.

I am no rsync expert; in fact, I'm fairly new to using it. It's one of those tools that's always been sitting there, ready for use, but never really touched. So, I was happy to have an opportunity to finally break it out! I started with the default set of flags suggested by the ssh-deploy action, -rltgoDzvO. Here's a quick breakdown of those options, plus a link to the rsync man page.

In the end, I settled on -rlgoDzvc -i, which makes three important changes for my use case:

Example of output from the -i option:

In trying to parse this output I came across this useful post on Andrea Francia's Blog. It's a bit outdated at this point, being posted in 2010, so if you come across something in the output you don't recognize be sure to reference the info below the "-i, --itemize-changes" option on the rsync man page. Even the manual mentions how confusing this output can be:

The "%i" escape has a cryptic output that is 11 letters long.

I came across the GitHub-provided cache action early in my workflow research and saved the tab as a "gold plating" step for last. A majority of my workflow time is spent in the "Install pip, pipenv, dependencies" step -- of a 33 second run 22 seconds are that step. I hoped that caching the Python packages would significantly decrease the Python step in my workflow, so I added a cache for both ~/.cache/pip and ~/.cache/pipenv (note: v2 of actions/cache should have support for multiple cache paths in one cache).

However, I did not find that this made any significant difference in the step time, and I'm still not really sure why. I am no Python package expert / power-user, I'm more of a casual user. Python serves the general purpose / kitchen-sink scripting language requirement in my life. I've used it to write application software for test equipment, automate flashing PocketBeagles, and processing weird data formats. That's all to say there's maybe something very obvious I'm missing here, or I'm just wrong about where the time in this step is being spent, e.g. "install" versus "processing".

My theory is that one way to speed up this step I will need to define my own Docker container step with all of the dependencies already installed. This is in line with my own goals of moving the build into a container for "know thy build environment" reasons, so it's likely to happen regardless of reducing workflow time. What's neat is I could actually automate the building and deployment of this Docker container to dockerhub as part of my workflow. Meta.

Oh, I also noticed that I was getting the warning Could not build wheels for pip, since package 'wheel' is not installed in my workflow, so I made a branch where I added wheel and setuptools to my python -m pip install --upgrade step but found that there was no speedup in the step.

This workflow has been working nicely for a week or so now.